We’re already well into 2014 (or at least it feels that way) and I’m just now uploading my first post so happy new year! *crickets* I’m very big on not writing unless I’m inspired. Who wants to read posts that ramble on with no real point anyway? Not this girl. Anyhoo, for all of you who are not yet aware, I’m Jamaican — born and bred — and as a paean to the awesomeness that comes with the territory, not to mention the myriad nonsensical questions/comments that I, and several other Jamaicans I know are bombarded with, I’ve decided what better article to publish first this year than a guide to getting around and essentially getting along with the world’s coolest people? (Can you say biased?)

You’d be surprised at the number of persons who, despite living in the information age, either believe we are barely civilised or subscribe to the weed smoking, zinc fence or beach scenes of Jamaican living depicted on television. So without further ado, my list of things to know about Jamaica/ns… useful information if you plan to pay us a visit, or good ideas of what to say (or not to say) if you happen to meet a Jamaican in your country, which you just might. Trust me, we’re EVERYWHERE.

1. Driving is part of the adventure. How so? Firstly, we drive on the left side of the road and many people are accustomed to driving on the opposite (right) side, plus a lot of the controls you might be accustomed to on one side of the steering wheel would actually be on the other side of it. That’s the first learning curve to get around. After that, you will need to get used to the windy, narrow, and often pothole-riddled roads which, sadly, are the norm here. We’re perfectly used to it but I always find that it takes some getting used to for others. You will also need to mentally prepare yourself for the task of driving in Jamaica, lest you encounter a coaster bus or route taxi driver and find out the hard way that road rage and extremely defensive driving are a thing here… definitely not for the faint of heart. The plus side? Jamaica is very scenic, has no shortage of warm, interesting people and has historical and cultural vestiges to fascinate you at every turn.

2. Yes, we do have the Internet. It’s quite surprising how many people believe that we have little or no computers here and very little access to the Internet, if any. Do we have running water? Radio stations? Airports? Houses? Computers? The Internet? Electricity? Supermarkets? You name it, we get it. We do have all of the above (not just two either). In fact, there are hundreds of ‘technocrats’ who are always in on the latest tech trends. Ask any Jamaican who has studied or travelled abroad about the nonsensical questions they got, astounding stuff. If you know a Jamaican, please, don’t irritate them with such questions.

3. Karaoke lover? Keep this in mind. Everybody and their mother, grandmother, aunt and cousin can sing. If they can’t sing, they rap, if they can’t rap, they deejay (a reggae/dancehall version of rap, for those who are unfamiliar), if they can’t do that, they are dub poets or something. Jamaica is replete with talent of this kind. You know how karaoke bars are usually filled with high-energy drunk people croaking and ‘yolo-ing’ out their songs? Yeah… not here. Eight out of 10 people at karaoke in Jamaica can sing, and very well too! We’ve got a lot more where Tessanne came from!

4. Our cuisine is highly underrated. I love Jamaican food… actually, I love food generally and a lot of my favourite cuisines are Asian, but I seriously believe Jamaican food is underrated. People are always pleasantly surprised by the kaleidoscope of seasonings and cultures and how well they blend to produce that strong, spicy, flavoursome taste that is uniquely ours. From the patties and coco bread to the jerked pork, pan chicken, the curries, grater cakes, run down, ackee and saltfish, oxtail, blue drawers (I kid you not) and escoveitched fish, make sure trying as much of the food as possible is high on your to-do list. Hell, even our KFC is superior to other territories and as a bonus, Red Stripe is probably the best beer you’ve never tasted, just ask the Knowles sisters.

5. We like to dress up… a lot. If you have a date with a Jamaican, or are planning to go out while you’re on the island, you might want to dress up. Jamaicans are quite fashion-forward and there is a HUGE style culture here. We take our appearance very seriously and almost everything is an opportunity to dress up, from the movies to the office, supermarket to red carpet, church to dancehall. Don’t believe me? Check out Kingstonstyle. 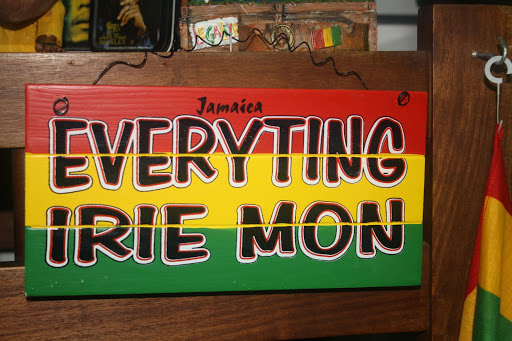 6. Want to make Jamaican friends? Learn to play football (as in soccer, not the NFL rugby kind), dominoes, or bingo, that will get you a long way. If you think you might suck at all of these things, you could try learning patois (our real first language/local dialect). However, it is important to note that NOBODY says ‘mon’ or ‘irie’, so if you really want to make friends with a Jamaican do not say these things. Ever.

7. We are definitely not as homophobic/gay bashing as we’re made out to be. While we may not be as liberal or accepting of this lifestyle as some other countries, contrary to popular belief, you can be gay and walk the streets of Jamaica. You may get an eyeroll, snicker or snide comment here or there depending on where you are, or you might be completely ignored, or guess what… treated like a human. Yes, there are ignorant, hateful, backward assholes who can make homosexuals’ lives miserable at times (just like in other countries), and our music does bash gays very heavily, but the average Jamaican really doesn’t have the time to care. We’re too busy thinking about our car payments, minimum wages, feeding our children, school, student loans, taxes, mortgage, horrible bosses… you know, normal life stresses.

Despite what you’ve heard, nobody here is trying to wipe homosexuals/pansexuals/all other sexuals off the face of the earth, and the majority of gay murders in Jamaica are carried out by other gays. You would be surprised at how prevalent alternative sexuality is in Jamaica, so don’t let the news scare you away if you happen to fall into that category. Try visiting for yourself. Caution: We have a very vocal culture here – this is the place where people call you out on everything from your weight to your sexuality, hairstyle, clothing and sex appeal – so thick skin is an asset.

8. Jamaica is more mountainous than ‘beachy’. It’s called the land of wood and water for a reason, we don’t all live on or close to the beach… in huts with hammocks and a never-ending supply of jelly coconuts. This is Jamaica, not Hawaii. (See what I did there?) We do have mostly sunny weather but we also get a lot of rain, and there are parts of the country like Malvern in St Elizabeth, Mandeville in Manchester, Bull Head Mountain in Clarendon and Hollywell in St Andrew that can get extremely cold, and even a little snowy (on very rare occasions).

9. Marijuana is NOT legal here. I know… crazy right? Very true though. The ‘to be or not to be’ debate surrounding that issue is happening with the government as we speak, and we’re all not-so-secretly hoping they’ll just ‘free up di ganja’.

10. We don’t all look like Bob Marley. Our motto is ‘Out of many, one people’ and that couldn’t be more real. See the collage below? Everyone in it is Jamaican. History has guaranteed that we’re all kinds of mixed up, since we moved from being colonised by the Spanish, to the British, importing workers from China and India to work alongside African slaves etc. This also means *gasp* we’re not all Rastafari! Jamaica is actually a predominantly Christian society , but that’s another story…

Thanks for reading and I hope my pointers help. Love and light from paradise!

Big up Google for the images!