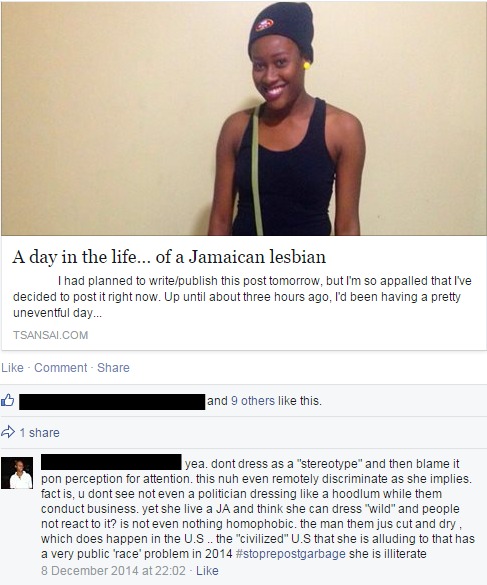 —An example of the kind of backlash the post garnered.

Happy New Year! May 2015 bring you nothing but happiness, peace and prosperity. I urge you all to use this first week as a time of reflection, introspection and preparation for the coming months. It is customary for me to do a routine end-of-year cleansing, expelling that which no longer serves me well in all aspects of my life, so January tends to find me streamlining it all to forge ahead….2015 is no different.

Today I’m re-examining one of the most significant events of my life last year. It happened on Thursday, December 4 at around 6:30 PM when a snap outfit decision catapulted me into what I call ‘Advanced Jamaican Homophobia 101: Lesbian edition’. It was very eye-opening and equally frightening for me, so I wrote about what A Day in the life… of a Jamaican lesbian was like. As expected, the responses were even more interesting. I’ve categorised the most popular ones as follows:

1. Straight women get harassed in Half-Way-Tree all the time. How is this news?

2.Why are you looking down on/demonising Half-Way-Tree and the individuals there? You’re not above them.

3. This story is clearly exaggerated/a blatant lie. You’re a drama queen who just wants attention and used a topical issue to get it.

4. Why dress like a lesbian and pretend to be surprised when you’re treated accordingly? FOH bitch!

5. Omg! I have/know someone who has had a similar experience!

6. Wow, I didn’t think it was this bad, thanks for sharing, I’ll share it too!

7. Of course there’s also the men and women who reached out thanking me for the post and segued into the “if you’re actually gay/straight contact me anytime.” 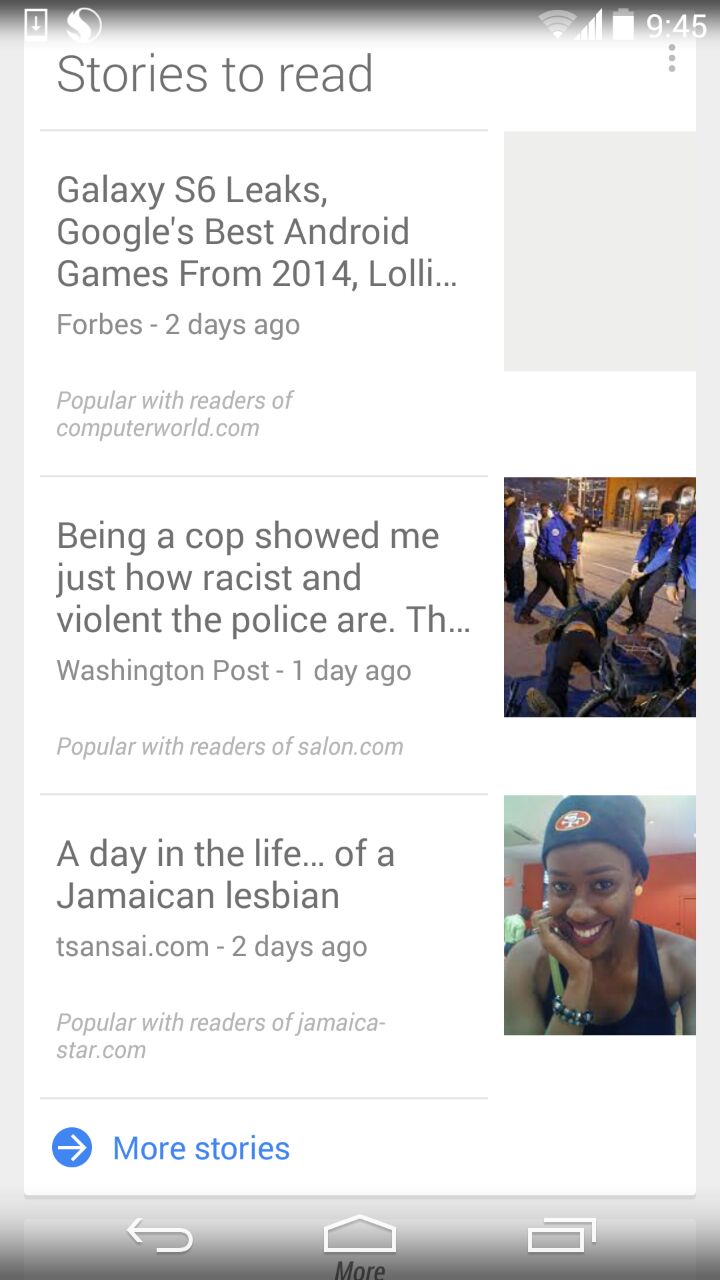 Outside of that, I’m glad I saw the importance of sharing that experience with the world and I penned it in an effort to bring awareness to the issue of homophobia, violence and fashion/appearance in Jamaica, and how closely linked they all are. The article turned out to be the gift that keeps on giving, apparently. Going viral by day three, still getting hits from all over the world and even bringing in potential business opportunities. It is, to date, my most widely read and shared blog post, even trending briefly on Google.

All of that is well and good, but contrary to popular belief, I didn’t write it because I wanted a slew of hits or to become an overnight celebrity. I was genuinely appalled and terrified at how easily I could have lost my life over an assumption about who I sleep beside at night, and a crash course in the understanding of how terrible it must really be to be gay sans wealth and privilege in Jamaica. (I say this because the average wealthy homosexual is hardly likely to be found taking public transportation or walking around in Half-Way-Tree). The virality of the article pleased me because I thought it would be a step (hopefully a big one) towards opening our eyes , instead of discriminating against our fellow countrymen and subsequently attacking them for their decision to be themselves.

Alas, a colleague alerted me to this shocking attack on an alleged homosexual female published in the Jamaica Observer yesterday, who fled her home to avoid being hacked to death by her neighbour who assumes she is a lesbian. Sigh… Things like this really break my heart. Sure, you want to be judgmental, but what is it that propels you to move forward with that, barge into the woman’s home and attempt to take ‘justice’ into your own hands by way of murder? How dare you!

What I find even more perplexing is the police/justice system’s handling (or lack thereof) of the matter. Not that it’s surprising, unfortunately. What’s really sad is we’re unlikely to see a change until the tourism sector we speak so highly of starts reflecting the impact of the nation’s poisonous psyche. The general mindset when it comes to these things is as much about homosexuality as it is indicative of a lack respect for individuals personal space, decisions and lives. People keep asking me why I’m ‘siding with the homosexuals’ and that question in itself makes the problem very clear.

There is no need to take sides. We are all humans, that’s the race and class that I care about and what we should all take into consideration. It is only after we grasp the concept of separation and otherness from our minds that we will truly begin to understand.

2 thoughts on “One month later: Reflections on ‘A Day in the Life of a J’can lesbian’”