Calm down – the name is nothing but positive, femme fatale and a nod to empowerment. Enter artiste-on-the-rise (and super-attractive human if I do say so myself), Shayna McHayle aka Jungle Pussy, who’s being plugged by a number of industry insiders — Erykah Badu, Village Voice, Complex & Paper Mag, to name a few— as the next big female rapper …and with good reason. She has that intriguing aura, model good looks and the wit, well-crafted lyrics and smooth delivery to make you sit up and take notice. Her debut mixtape Satisfaction Guaranteed was pure fire, and if Now Or Later —the just-dropped first single/video on her newest project — is anything to go by, its successor will be a sure hit.

I first got wind of her some time last year after spotting her picture (below) on Pum Pum Socks’ awesome Tumblr account. On realising her name, I was instantly intrigued – decided to go look her up and fell in love with her music. I also found out she has Jamaican roots, so when my fellow blogger friend Keebs ran into her vacationing in Jamaica, I had to reach out for a little chat. Dive in with me as I get to know this budding rap sensation… 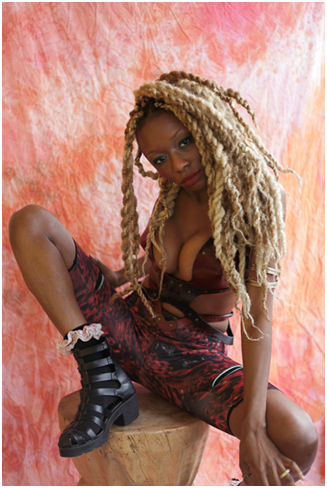 JP: Jungle Pussy and Shayna are one in the same, it just so happens that my name can overshadow me. Like who I really am, but I promise you, I wake up Shayna and Jungle Pussy simultaneously.

SS: How did you become a rapper?

JP: Well, it came to me actually, I didn’t become it. I was just like many young people in their 20’s, going through life trying to figure out what we do and don’t want to do. I had so much I wanted to say, it seemed so right to make music and use music as my medium to share my experiences. I was never interested in the music business, I was more interested in the fashion world. I went to the Fashion Institute of Technology in New York City where I studied fashion merchandising and then I felt like I wanted to be a stylist or a merchandiser. After two years I decided ‘this isn’t for me’. It’s so fake, so pretentious and everyone thought they were better than everyone. What happened to me was that I started experiencing things I didn’t want. So I knew I didn’t want fashion. I decided to continue to be me and grow, unconditionally and be limitless and music really gave me the opportunity to do that.

SS: Was it intentional to have such a sexually and racially charged name?

JP: It was definitely not intentional, it came to me… I actually got it when I was in college. I had gotten a MacBook and the first thing I did was take pictures and record videos in PhotoBooth and I was obsessed with it. So I would always do videos about my day or something that happened and post it on YouTube, but I needed a name for it so I just used Jungle Pussy. At the time it was just a term I used because I had so much animal print and I felt like a little jungle cat in this concrete jungle of the world… it just made sense. Then when Twitter came out, I thought to myself, I need a Twitter Name that nobody is going to take. So I just decided to use Jungle Pussy because I had already been using it for my YouTube videos so no one’s going to have an issue, but it really blew up on Twitter. Then my followers kept encouraging me to do music and I thought, ok, let me try… and I did and it came out very nicely.

SS: How do people respond to the name?

JP: They can’t deal, they can’t take it. They act like I’m asking their children to write it on their homework or have it tattooed on their foreheads and arms. I’m not asking for any of that, I’m just sharing my art with the world.

SS: Why did you come to Jamaica recently, was it just a vacation trip?

JP: I came to Jamaica for some tropical breeze, some tropical sun. I came to clear my mind, to wake up not needing anything, to wake up having freshness and goodness all around me so that I’m relaxed enough to create and write some new music for my upcoming project.

SS: How did it feel for you getting Erykah Badu’s public approval and endorsement twice?

JP: Getting Internet love – Internet acknowledgment in general – from Erykah Badu not once, but twice, once at the very start of my career and now at the sophomore area, is such a blessing. I’ll still hold onto the first one that she did in 2012 for Cream Team. I still hold that, that was enough for me. The second one is eye-opening. Now I have two, this is abundance to me. The fact that she knows that I exist and likes my stuff enough to share it on her account. That is so powerful; that is something I would have never expected, something I guess I secretly have wanted… but she’s the Queen so I wouldn’t expect it to come so soon. Hallelujah!

SS: Who/what are your music and fashion influences?

SS: So what have you been doing since Satisfaction Guaranteed dropped last year?

JP: I’ve been working on new music for my next project called Pregnant with Success and it’s coming out this fall/winter.

SS: And what do you do when you need to unwind?

JP: There’s various things I can do — I exercise, I can free write, I draw, paint, look at sexy people and wonder what life would be like with them {laughs}.

SS: How do you describe your music?

JP: I haven’t categorised my music yet because I’m finding it so hard to find anybody on Earth who thinks and feels the way that I do, so until then, I guess a category will be made, because for now it’s  all me.

SS: What will you use to measure your success as an artist? When will you say…‘yes, I’m there’?

JP: That’s a good question. Definitely not now, but I am not ignoring the fact that I have come so far in a short amount of time and that is such a blessing. So I really don’t know. That’s one thing too, people say because Erykah tweeted me, that’s it, I made it. That is awesome, that is great… but there is so much more to do and so much more to accomplish. I don’t know how I will measure it. I’m Pregnant with Success, though. It’s coming.

SS: I notice you have a lot of positive self-image and health-conscious lyrics/imagery in your songs, is that an intentional agenda?

JP: It’s not an intentional agenda at all at all. When I said the Micky D’s line, “seen you up in Micky D’s knew you didn’t love yourself”, people took that like OH MY GOSH. Now when people go to McDonald’s they tweet me like “OH MY GOSH, I’m in McDonald’s. Don’t hate me.” And I’m just saying, I don’t hate you, I did not tell you don’t eat it, I just said if you eat it, you may not be loving yourself as much as you should be, but I do practice the lifestyle that I put in my lyrics, all the things I write is me, to share parts of my life. So I share my food parts, I share my food decisions, my health decisions that I make. And that’s it. It’s not to brainwash anybody, but I do want to look like Angela Bassett when I’m 43, so I’m on the right path.

SS: You have Jamaican and Trinidadian roots, which artistes or producers from these countries would you most like to work with?

JP: I don’t know… that’s the thing, collaborations and features, they’re cool to me but I’d rather have a relationship, their friendship. Talking to them like a regular person, but for Jamaica, it would have to be Patra and we already communicate, she’s my friend already. However, she’s doing her thing and I wouldn’t even ask her to do that, I’m more concerned about her. People are like, I want this person to get on my song, I’d rather a 30-minute conversation with them than asking them to be in the studio for hours writing about me, even though that would be awesome.

SS: Are you vegan?

JP: I am not vegan because I still wear a lot of leather pants, shoes and bags, but I feel like when I get older as I continue to minimise my vanity and my desires, that can happen. I could be vegan. I know I can do it.

SS: You have a very strong presence — striking features, commanding height, witty lyrics, sex appeal, consciousness… how do you make it all gel into one image as an artist?

Was this something you thought about or are you just free-flowing?

JP: Hmmm… My striking features, my commanding height {I’m 5’10”}, my witty lyrics, sex appeal, consciousness, there’s so much to me… so much complexities, levels and everything to me. How am I going to present this to this world? Then I said Shayna, the world is already crazy, complex, hypocritical and contradictory. So, they should have no problem accepting me for who I am and for me owning all of these layers to myself… and they do, and they will have to more and more as I continue to reveal more and more things about myself. As I continue to peel back these layers, I’ll continue to get ready to show you guys, so get ready for more and more of me…

Starting with Now Or Later.

One thought on “Dweet Yute! Jungle Pussy is probably the best rapper you’ve never heard of… & Jamaican too!”